One class of secondary emissions originating from the interaction of a therapeutic ion beam with tissue features prompt photons, produced in fast (~ns) de-excitation of excited nuclei following nuclear interactions between the particle beam and the organic tissue components (predominantly O,C,N). Such an inelastic scattering of a proton beam hitting an 16O nucleus is schematically shown below, resulting in an excited oxygen nucleus, emitting a prompt 6.13 MeV photon.

Typically these prompt photons span a multi-MeV energy range between ca. 3 MeV and 6 MeV, as can be seen from the spectra below, which were measured (with a LaBr3:Ce scintillation detector, see Light-Based Detectors) during irradiation of water (top) and PMMA (bottom) with a clinical proton beam (225 MeV from the OncoRay facility in Dresden). Groups of photons originating from 16O* (6.13 MeV and its single- and double-escape peaks) and 12C* (4.44 MeV with single- and double-escape) are visible. 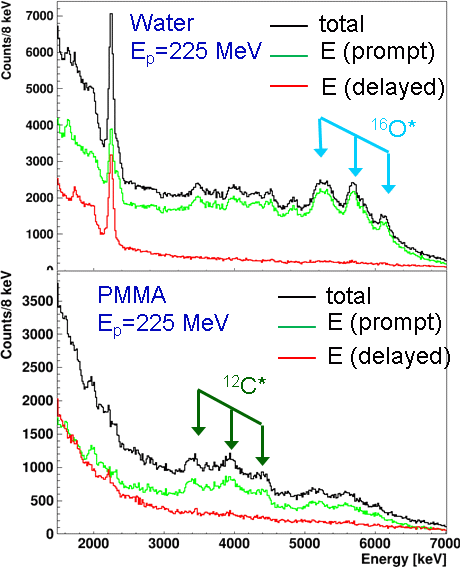 Different features of these so-called prompt gammas can be exploited for range verification in particle therapy, such as spatial distribution (from simple 1D profiles to 3D imaging), characteristic energy (so called prompt gamma spectroscopy) and timing properties (so called prompt gamma timing). While systems enabling mechanically collimated detection of prompt gamma emissions (perpendicular to the beam direction) for 1D range monitoring have reached the phase of clinical testing (reference Richter, Xie), the more desirable full 3D imaging capability is yet to be demonstrated. To this end, several groups are investigating the development of Compton cameras, which exploit the kinematics of Compton scattering of (multi-MeV) prompt photons to reconstruct their emission position via the reconstructed Compton scattering angle, spanning the so-called Compton cone. These systems typically consist of one or more scattering layers and an absorber component, all registering the energy deposit and interaction position of an incoming prompt photon. In Garching we are developing a Compton camera prototype designed not only to detect the scattered and absorbed photons, but also to track the Compton-scattered electrons, thus reducing the Compton cone to an arc segment and relaxing the requirement of a complete absorption of the scattered photon energy in the absorber component. For this purpose, the scatter component is segmented into several layers of position-sensitive detectors, able to track the Compton electrons, as depicted in the following sketch. 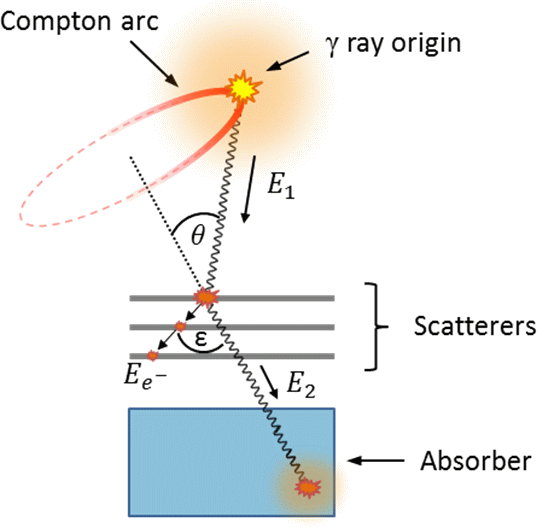 Thus events with incompletely absorbed photon energies can still be reconstructed, which increases the reconstruction efficiency as one of the most critical properties in the design of a Compton camera.
In our design the scatter component consists of a stacked array of six highly segmented double-sided silicon strip detectors (DSSSD, 5x5 cm2 active area, 0.5 mm thick, 128 strips/side with 0.39 mm pitch), shown in the left photograph below. 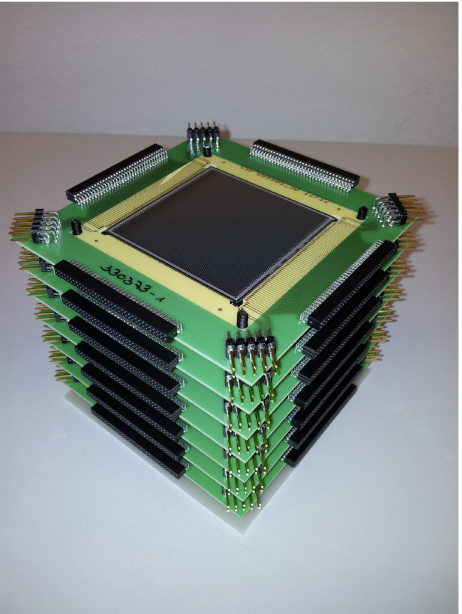 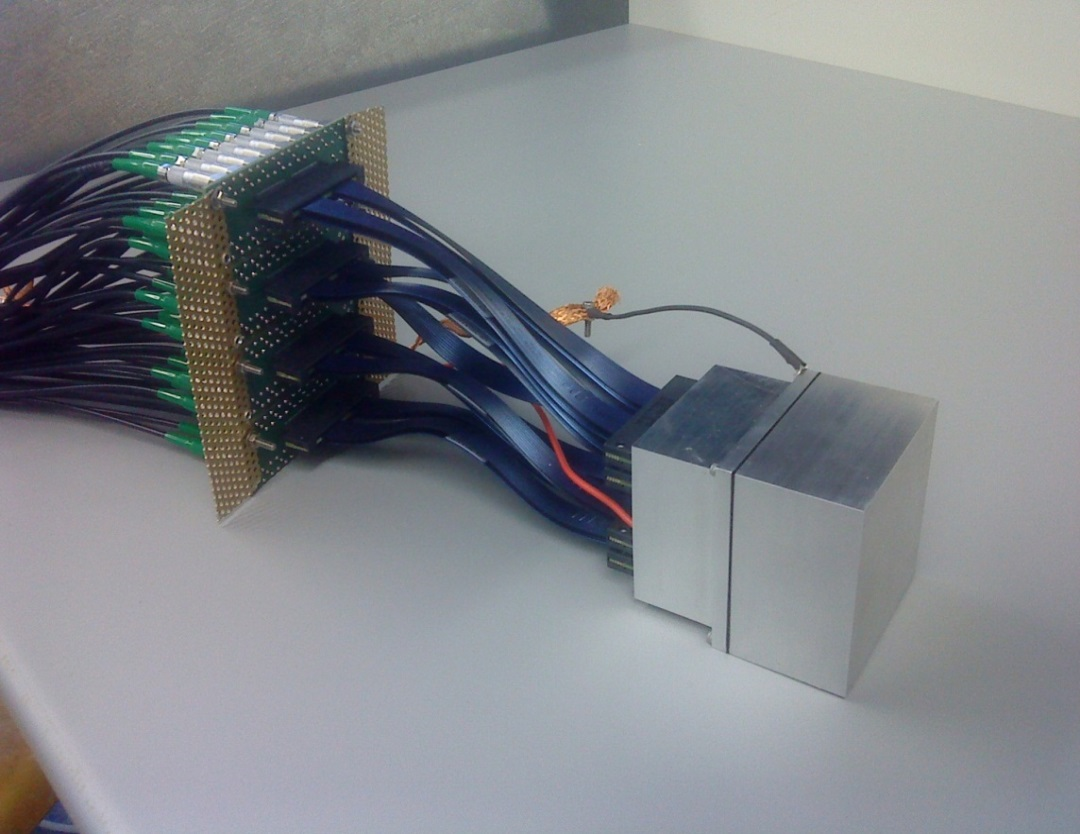 A LaBr3:Ce scintillation crystal (50x50x30mm3) was chosen as absorber detector due to its excellent properties (energy resolution < 4% at 662 keV, time resolution ca. 270 ps). Position sensitivity is provided by its readout via a multi-anode photomultiplier tube (PMT). The detector can be seen in the right part of the figure above. The complete camera system can be seen in the following figure, where the first scatter detector is visible with its 4 frontend readout boards, while the other scatterers and the absorber are hidden behind. 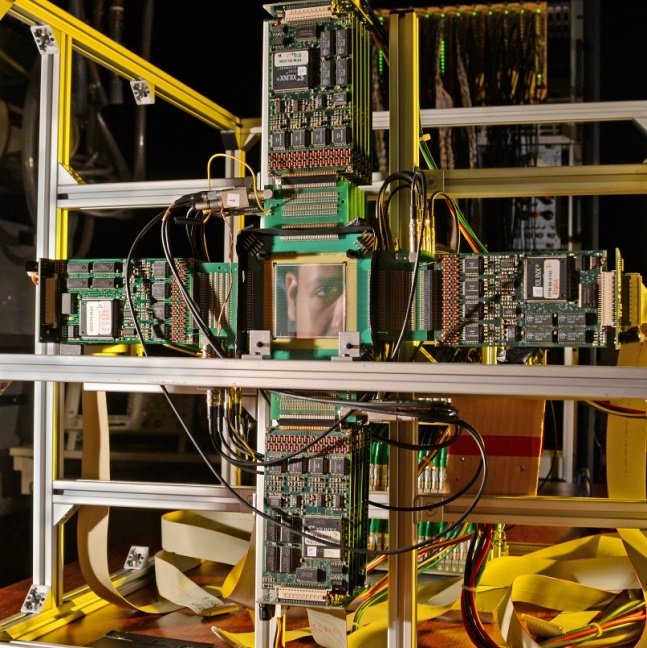 This Compton camera development is being supported by thorough Monte Carlo simulations and reconstruction studies relying on the codes Geant4 and MegaLib. Furthermore, we are exploring new methods to link the prompt gamma verification approach to the treatment planning process and advanced imaging methods.